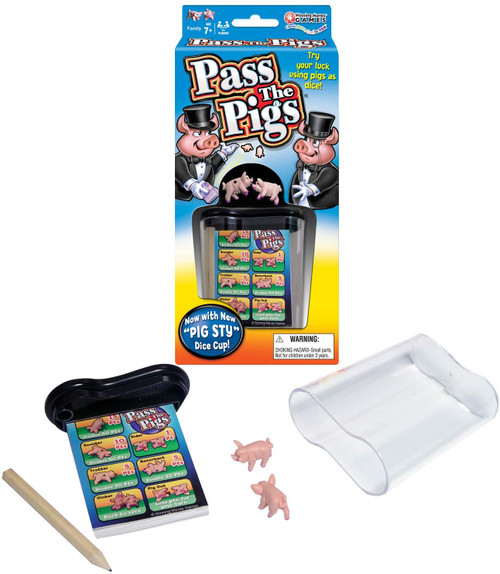 In Stock
Serious Item Code: 12379  Mfr Code: 1046  Brand: Season: Theme: Event: Type: Difficulty: Finished Size:
Pass The Pigs is an easy to learn dice rolling game, except instead of six-sided die you're rolling two normal sided Pigs! These goofy Pig figures bounce and roll into all sorts of positions and combinations, so expect the unexpected.

Start your turn by rolling both Pigs simultaneously, Then, using the included score charts, add up your score for the roll. Now, you can keep rolling until you decide to take the points you've earned and stop, or you roll a Pig Out (and lose all points earned that turn) or an Oinker (and lose all of your points completely.) The first player to reach 100 points wins!
Game Includes

This hilariously creative and simple game has been around for over 25 years! Jeff Bridges, 2010 Oscar nominated star himself, has been recorded as saying that Pass The Pigs was "one of my favorite games to play on the set [of "True Grit]; it's sort of a craps for kids." He even introduced Tobey Maguire to the game, while on the set of Seabiscuit, and Maguire loved it so much that he bought more than a dozen of the games as Christmas presents. That's right; Peter Parker played Pass the Pigs! Try saying that three times fast!